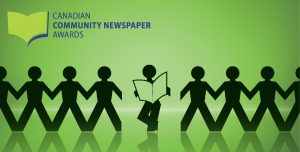 News Media Canada is pleased to announce this year's winners of the Canadian Community Newspaper Awards.

Among this year's highlights:

The full breakdown of results here.