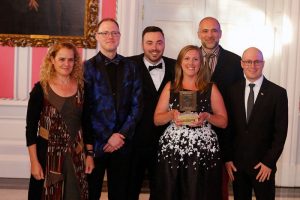 The Telegraph-Journal has won the 2018 Michener Award for meritorious public service journalism for its 18-month series Sounding the Alarm.

The Saint John newspaper discovered a critical shortage of paramedics was forcing New Brunswick’s ambulances to sit idle and unstaffed. It was an issue with life-and-death consequences: at least one person died.

“There were many stellar entries to the Micheners this year — powerful work which uncovered political corruption, gave voice to the voiceless, changed laws — but none more transformative than this series,” said Alan Allnutt, president of the Michener Awards Foundation. “It was a major issue in the 2018 provincial elections and gave rise to a new government championing a wide-ranging overhaul of the ambulance system.”

Her Excellency the Right Honourable Julie Payette, Governor General of Canada, presented the Michener Award trophy to the Telegraph-Journal in a ceremony at Rideau Hall in Ottawa on June 14. The media outlet was among nine Canadian newsrooms honoured at the ceremony. The Michener Award honours, celebrates and promotes excellence in Canadian public service journalism that makes a significant impact on the public good.

To read more about the Telegraph Journal's win, click here.

You can check out some photos from the festivities here.