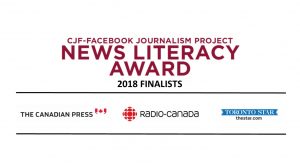 The Toronto Star has been nominated for by the Canadian Journalism Foundation for its inaugural news literacy award.

The Star received a nomination for its Trust Project, a newspaper-wide initiative to enhance reader trust, which includes a weekly trust feature, regular columns by the public editor examining reader trust and an overhaul of how articles are labelled to distinguish between news stories and analysis.

You can read more about the finalists here.

The winner will be announced at the annual CJF Awards on June 14 at the Fairmont Royal York.