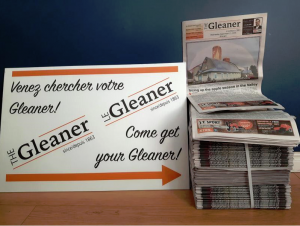 In November 2018, The Gleaner, a community newspaper based in Quebec, was struggling. Instead of closing down, a non-profit community organization was formed and an 11-member steering committee took up the task of publishing the paper with former journalists/editors and several volunteers with some background in media but no journalism experience.

This past June, The Gleaner re-launched with a print edition and 5,000 copies, delivered by volunteers.  This was followed by issues in August and September and then in October they formalized the non-profit organization and elected a board of directors.  Their goal is to move to bi-weekly printing in the new year with weekly online updates along with the challenge of reaching 1,500 paid subscribers.