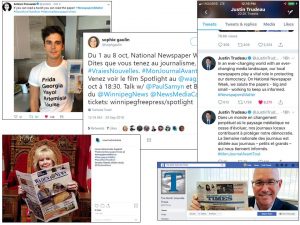 To support the National Newspaper Week 2019 campaign News Media Canada will be spearheading a national influencers campaign on social media. Publishers can support the program locally by reaching out to notable Canadians in their own markets (politicians, athletes, authors, community leaders, etc.) and ask them to post a photo with their newspaper and include #NewspapersMatter!

Here is a sample email you could send to encourage local influencers to celebrate with us from October 6-12:

During the week of October 6-12 we will be celebrating and we want to include you!

Every year, during National Newspaper Week, we recognize the importance of newspapers across the country -  as they are truly the fabric that stitch communities from coast-to-coast-to-coast together.  We’re asking Canadians, in markets large and small, to show their support by posting on social media, sharing why their local newspaper matters to them. We’re hoping you’ll join others and post a photo of yourself with your favourite Canadian daily or community newspaper (you can be reading it in print or online) with a message about why you love your newspaper using #NewspapersMatter during the week of October 6th.

Newspapers matter. In fact, nine in 10 Canadians (88%) read newspaper content every week - and that’s because of the credible, trusted news reporting that they provide. I hope this comes as no surprise to you (and that you’re one of those Canadians!).  Help us send a message that newspapers matter - now more than ever. Reply to this email to confirm your participation, and we will be in touch to coordinate.