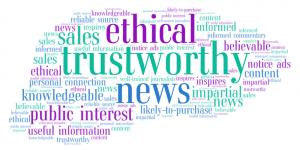 A new study conducted by Totum Research on behalf of News Media Canada has found that printed newspaper ads engage Canadians more than any other medium, print or digital. Specifically, the findings published in the 2019 Local Newspapers: Engaged and Connected Report reveal that advertisement engagement for print newspapers is nearly two times higher than other media formats, which includes television, radio, digital newspapers, magazines, social media and online searches.

“With the sheer volume of ads Canadians see each day, we know that having an engaged audience is crucial for advertising to break through and drive action,” said John Hinds, President and CEO of News Media Canada. “Our research demonstrates that Canadians are paying attention to newspaper ads, likely because of their trusted environment.”

“It’s clear from this research that when Canadians are reading their local paper, they’re engaging with newspaper ads at a deeper level than they are with other media formats,” says Hinds. “This new information confirms the power of newspaper advertising and, we hope, will help marketers reconsider advertising in local newspapers across the country.”

This new research, paired with the seventh annual Newspapers 24/7 Readership Report, found that newspaper readership in Canada is at an all-time high—with nearly nine out of 10 Canadians reading newspapers on a weekly basis.

The survey was conducted by independent firm Totum Research and was produced with the financial support of the Government of Canada through the Canada Periodical Fund of the Department of Canadian Heritage.