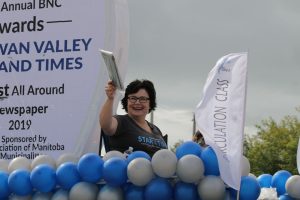 Inspired by the recent Newspapers Matter campaign, the Swan Valley community newspaper wanted to celebrate their new title of Best All Around Newspaper from the 2019 MCNA Better Newspaper Competition.

To share their pride in their newspaper with the community they entered a Swan Valley Proud float in the Swan Valley Chamber of Commerce Parade, for the opening of the local NorthWest Round-up and Exhibition on July 26.

“Our newspaper is proud to be a part of this community for nearly 120 years and we are proud of what we have been able to achieve” says The Swan Valley Star and Times editor, Danielle Gordon-Broome.

“Our float featured an almost 10 foot tall re-creation of our Best All Around Newspaper trophy and the white flags placed around the trailer detailed the 10 other awards we won at the 2019 Better Newspaper Competition.  This float took many, many hours to create but  as this is the first time we have won this award in the 100 years of the competition’s existence, we couldn’t let the occasion pass us by!”

In addition to their float, the Star and Times produced a special edition newspaper, themed for the parade. Copies of the newspaper were tossed to the crowd along the parade route, along with candy. It's a fantastic way to share their pride in the newspaper and the role they play in their community. 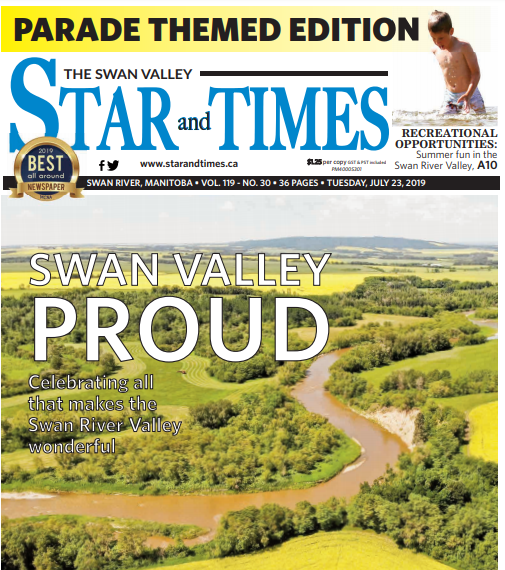