This week marked a black spot in the history of Canadian newspapers with the closure of three dozen papers, taking out of circulation three million copies of printed newspapers each week and eliminating more than 300 jobs.

Joly’s response in Ottawa was a refrain that she has been using more and more lately, saying the federal government is already helping news providers. "We value the importance of journalism and that's why we invest up to $75-million per year in local media," she said.

This is true only if you use a definition of “local media” unlike any other ever attempted.

The minister was referring to the Aid to Publishers program, through which the federal government provides annual grants to printed publications—magazines and non-daily newspapers—primarily to help with distribution costs.

Many Canadians will be surprised by who is getting this support for “local media.”

The list goes on and on to hundreds of magazines that get federal funding. It raises all sorts of questions. Why does a TV book distributed by a broadcaster qualify for funding when a TV guide distributed in a daily newspaper does not? And how on earth does giving a subsidy to a promotional magazine for a TV channel qualify as support for local media?

The simple fact is that the Aid to Publishers program mostly supports magazines, an industry that, for the most part, does not have a viable business model without public subsidies.

Many community newspapers get money, but relatively little. Those affiliated with NewsMedia Canada got between $3,301 and $124,252 in 2014-15, and averaged $25,831, less than two per cent of what The Hockey News received. Daily newspapers are not eligible.

Overall these community papers got about $7.8 million of the $68.9 million handed out. Some went to ethnic, farm and religious publications. The Catholic Register got $403,355; The Western Producer got $1.2 million.

The bulk—$53.4 million—went to magazines. Some individual magazine companies get more per year than all community newspapers combined. TVA Publications got about $7.5 million this year, as did Transcontinental Media. Rogers Media, publisher of Chatelaine,  Maclean's and other magazines, got $8.9 million in 2016. Reader's Digest got $3 million this year for its related publications.

The Aid to Publishers program is being revamped. It’s unclear what the new qualification criteria will be or whether the program will get any more money.

However, the review is doomed to failure unless the federal government understands that it is not currently supporting local news media in any meaningful way and that the current funding, even if redistributed, will do little to help reporting in local communities across Canada.

We have not heard this from Joly. In fact, her Tweeted response to this week’s closures suggested she still does not understand what is happening in local media, where collapsing revenues are forcing cuts in reporting across all traditional news outlets.

“We know Canadians care about their local media and we will continue to support it,” Joly Tweeted. “The decision to swap and shut down these community papers on the same day is cynical and disappointing. Our thoughts are with the hundreds of workers and their families affected by these closures.”

The closures this week were not cynical. There were inevitable in a challenged business in which print newspaper revenues have fallen dramatically. We will see more of them. What they mean for many communities is less reporting about what is happening in people’s back yards.

It’s unlikely that people in those communities will be comforted by Joly’s claim that her government supports local media.

Bob Cox is the chair of the board of News Media Canada and publisher of the Winnipeg Free Press. 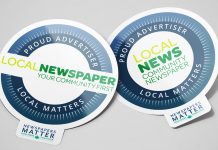 OP-ED: Proud local businesses are the heart of all communities