The federal government continues to spend more than half (51 per cent) of all its advertising dollars with television. Newspapers (daily, community, official language/multicultural/Aboriginal), combined, account for less than 6 per cent.  Research conducted with Canadians in December 2016 found that newspapers are the most appropriate medium for advertising federal, provincial and municipal government programs and services. Canadians in smaller markets believe 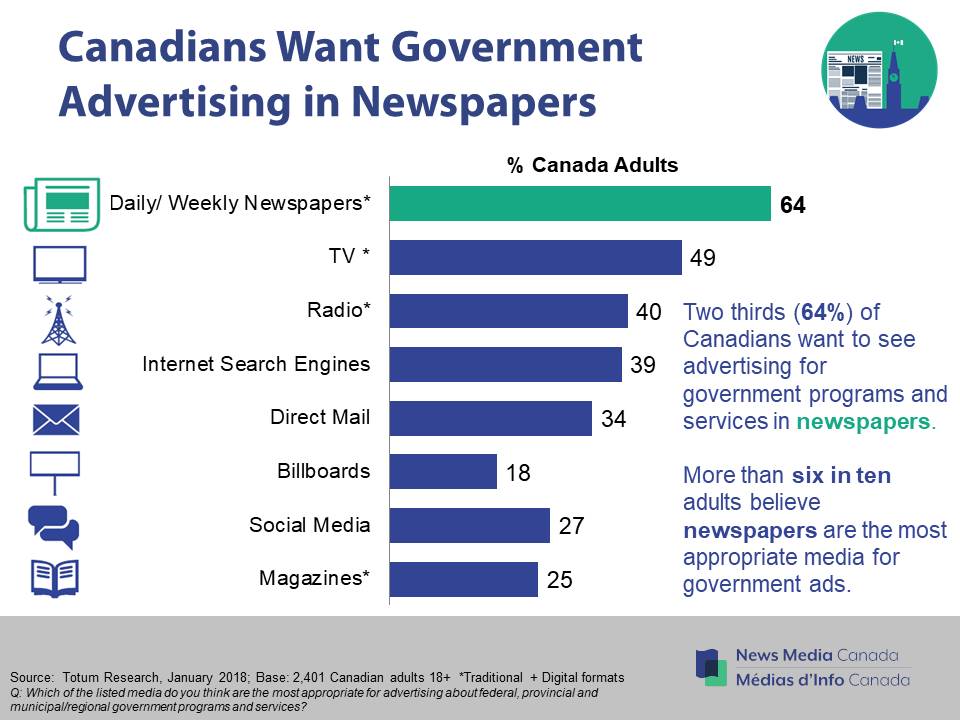 that community newspapers are just as relevant as television, however government spending does not reflect this. To see more, please consult our 2015-2016 report.

In 2013-2014, by contrast, the federal government spent $75,213,380 on advertising (media and production) in 2013-2014. Advertising in community newspapers (*excluding Official Language, Ethnic and Aboriginal publications) accounted for just $867,153. On average, this results in annual federal government spending of $1,021 in each of Canada’s 849 local community newspapers*.

The government should and must communicate the programs and services it provides directly to citizens and get the best value for the taxpayer’s money. However, the way in which it chooses to advertise says a lot about what media it values, and why. TV and Internet ads work to build brand, not to inform. Community newspapers generate debate and serve as a forum for discussion.

News Media Canada has prepared the following resources designed to provide publishers with information on the issues regarding government advertising spending.

Publishers are encouraged to help make our collective voice heard by educating the public with a opinion/editorial piece.

For more information, contact Kelly Levson, Director of Marketing and Research, at klevson@newsmediacanada.ca.