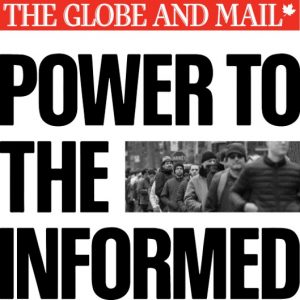 The Globe and Mail has launched a new brand campaign and a refreshed Report on Business magazine.

Created with Cossette, the Power to the Informed brand campaign begins with a Cineplex spot along with Pattison and Astral billboards and wild postings in Toronto, Vancouver and Calgary.

The heart of the campaign is that the right information in the hands of the right people can transform lives, businesses and communities. At no time is that more evident than during an election, and until Oct. 22 the campaign will focus on the federal election before it shifts into reminding readers and potential subscribers of the power of information in their everyday lives—from deciding what book to read to managing a stock portfolio.

The Globe also launched a newly re-engineered Report on Business magazine. Under the leadership of James Cowan (formerly of Canadian Business), ROB magazine is now the “Magazine of Leaders” and will focus on business strategy and leadership.

The magazine features new rankings: the inaugural Canada’s Top Growing Companies, based on percentage growth over the last three years, is out this month. The November issue will focus on wealth, including an early market outlook for 2020 and The Globe’s exclusive ranking of the 100 top-paid CEOs in Canada. CEO of the Year will be announced in December and a new benchmark of the gender diversity in the executive ranks of corporate Canada, called "Women Lead Here” will be available in the spring.