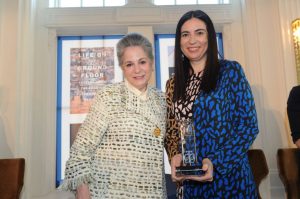 Toronto Star reporter Tanya Talaga has won the $25,000 RBC Taylor Prize for a book about the struggles of Indigenous people in Thunder Bay and the toll it is taking on young lives.

The book, Seven Fallen Feathers: Racism, Death and Hard Truths in a Northern City (House of Anansi Press), was spawned by a reporting assignment that sent Talaga to the northwestern Ontario city in 2011.

Talaga noted 10 per cent of the sales of her book go to the Dennis Franklin Cromarty High School, the secondary school that six of the seven youth attended before their deaths, and that she’ll make an additional donation from the prize money.

Talaga also thanked the Star for its support while researching and writing the book.

You can read more about her book, and this prize, here.