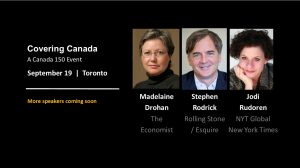 Canada is journalism's latest cool assignment. Renewed international interest in all things Canadian means even we’re looking at our country from a different perspective—thanks in part to the Age of Trump and its contrast with our refugee-embracing, feminist prime minister. From discussing news outlets covering more Canada to others discovering our country and casting it in a flattering light, this panel explores the stories gaining traction with audiences, both locally and abroad, and the stories that still need to be told in a fraught political environment.